This year's ATP tournament Plava Laguna Croatia Open Umag once again gathered famous tennis players to the courts of Stella Maris Resort, as well as fans from all over the world. Guests from Germany, Austria, Italy, Denmark, the Czech Republic enjoy exciting matches, but also the entertainment and gastronomic offer of the Umag tournament.

Among them is the Danish Jakobsen family, which did not faltered before the distance of 1515 kilometers and came to Umag to support their compatriot Holgar Rune at the Goran Ivanišević ATP Stadium. Although their favorite was eliminated in the first match, the sympathetic Danes are not disappointed but remain in the tournament they are attending for the ninth time.

“We have been coming to the tournament for nine years and spending the summer in Umag. There are great matches again this year, there are a lot of good tennis players. There is music and great food around the stadium, the atmosphere is really great. Of course, we are coming back for the tenth time, the Umag tournament is already a family tradition for us!” - Mike Jakobsen from Copenhagen explaining the connection with Umag.

In addition to the tennis excitement, the tournament is accompanied by the music program Open Air Music, which enriches every evening with a concert that lasts until 2 hours after midnight. Cubismo, Neno Belan & Fiumensi, Ana Rucner and Detour are some of the performers who performed at the Umag tennis festival.

"We’re aware that we can’t have fun like we used to, with Covid we’re all careful, but still every night is good fun. Also, really good food can be found around the stadium in the evening. Yesterday we tried traditional Istrian cuisine, and today we will have burgers. So there is something for everyone”' - concludes Mike, who arrived in Umag with his father Michael, uncle Kaare and brother Alex.

31st edition of the Plava Laguna Croatia Open Umag tournament will be played on the courts of the Stella Maris Resort until July 25. It is open to the public, who can attend matches in limited numbers. During the tournament, visitors can enter the ATP zone only with a digital green COVID certificate, which they can also get by testing at a test site in front of the ATP zone, as the tests are performed by a laboratory authorized to issue EU digital COVID certificates. 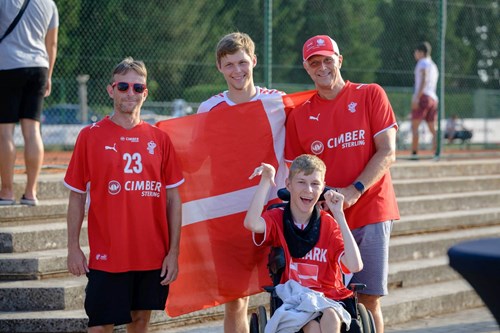 This site uses the so-called cookies to ensure better user experience and functionality. Using our site you agree to using cookies. Cookies can be allowed or blocked, or adjusted; you can read more about cookieshere. I AGREE